As I round the bend above Burbage car park in the Peak District I can see the distinctive white shape of the quattro over a mile in the distance. Parked on a dreary, wet lay-by, there’s no mistaking the muscular lines of the original 4 wheel drive rally hero. Even from that distance it looks special. There’s only really one word to describe it. Iconic.

This is Ben Johnsons car. I’ve never met him in person before, but I’d seen glimpses of his car on Twitter and after a few online conversations it turns out we live not to far away from each other, so I asked if he’d be up for a photoshoot of his car for the site. He was happy to. I love social media.

The car is a 1988 10 valve (find out more about the variants here) that produces around 200bhp with a mere 82,000 miles on the clock. While by Bens own admission it’s not totally pristine, it’s not far from it. There’s one or two very small signs of it’s age but the bodywork looks fantastic in its pearlescent white paint. Then only real issue with it is a bit of a dent on the nearside rear sill, apparently caused by it falling off a jack just after it was bought. I can sympathize, there’s nothing more gutting than dinging a new car, I’ve done it myself, chiselling a chunk off the front of my Elise, I nearly cried, actually I think I did… For days.

There’s something of the rally stage about a white quattro, I think it’s the contrast between the brightness of the body and the wide black grilles at the front and back. It’s brutal looking, a bit menacing but still fresh and modern even after 24 years.

This particular car has an interesting history. Ben had been looking around for a pearlescent white quattro for “quite some time” when he came across this car at an independent dealers in Leeds. The dealer had originally sold it to a guy who never paid for it. Turns out the buyer was a drug dealer, got himself a stretch in “The Big House”, 10 years, Armley Prison. Nice. The car dealer managed to repossess the quattro and kept it in storage for 12 years. 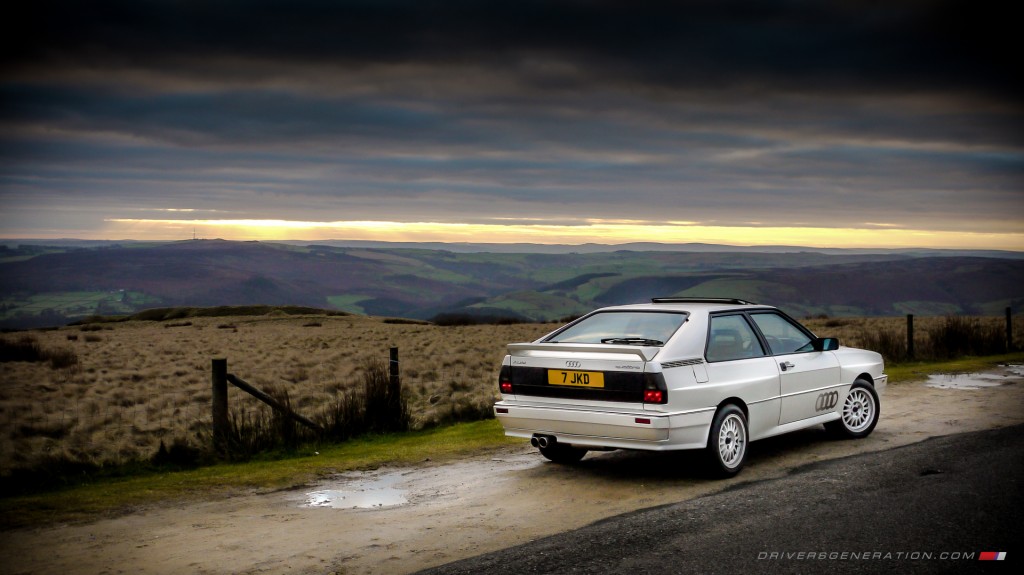 It was bought by Ben for a good price as a non runner. He trailered it home and employed the services of well known and respected quattro expert Phil Payne who traced problem to a rotting fuel liner caused by a full tank of fuel sitting in the car for 12 years. The car would tick over at idle but when any demand was placed on the engine the engine would die, the chunks of rotten liner getting sucked up and clogging the fuel lines.

After a replacement tank, fuel lines and fuel pump, it was put through an MOT with no problems. That was 4 years ago. Since then Ben’s put about a thousand miles per year on the car and apart from some bushes and a wastegate frequency valve, the cars been reliable. Happy days.

After our initial meet up at the lay by, photographs and chat, we head just up the road to get some more photos in the evening light. It’s about 3pm on a very overcast December and the light is fading fast but happily it’s not throwing it down as forecast. Ben is a top chap, letting me run around taking snaps of the beast. It’s not used everyday and I’m very aware that these wet salty roads are not the kind of surface any enthusiast would want to treat their car to. We get a few more snaps and head off for a nice cuppa in Hathersage.

You don’t see too many iconic cars on the roads these days, although there are apparently a few local quattros around, it’s still a joy to hear that 5 cylinder warble as we head off. They just don’t make cars like this anymore. Shame. I want one…

Many thanks again to Ben Johnson for getting his car filthy in the name of art.