Nestled snugly somewhere in the middle of the Peak District, lives a jammy lad, and a rather nice Mini…

I know he’s got more jam than Hartleys because I’ve known him for a long time. We went to school together and while we both admit that the better part of our foremost years were spent “pissing about”, I think Andy must have spent a little less time crayoning doodles of jet powered racing cars over his English exercise book than I did because a “few” years later, he’s somehow managed to fill his little garage with a couple of rather nice motors.

Both of us have always been into our cars. Minis in particular. In fact we each owned a Mini 1000 as our first car. Mine was a rather fetching shade of orange and consisted mainly of rust with only the minimum steel required for it to function as a conveyance. Andy’s was turquoise. And a bit nicer, annoyingly.

Over the years we’ve both owned a couple of different versions of the Rover Mini, I even had a lovely example of one of the last pre-injection Coopers and stupidly sold it just before prices went on the up. At the same time Andy owned a very mint Cooper 35 which I believe has now been converted into a semi race car.

But the car (one of them) that resides in his way too neat and tidy garage today is probably one of the nicest Rover Mini Cooper S Works cars in the country. 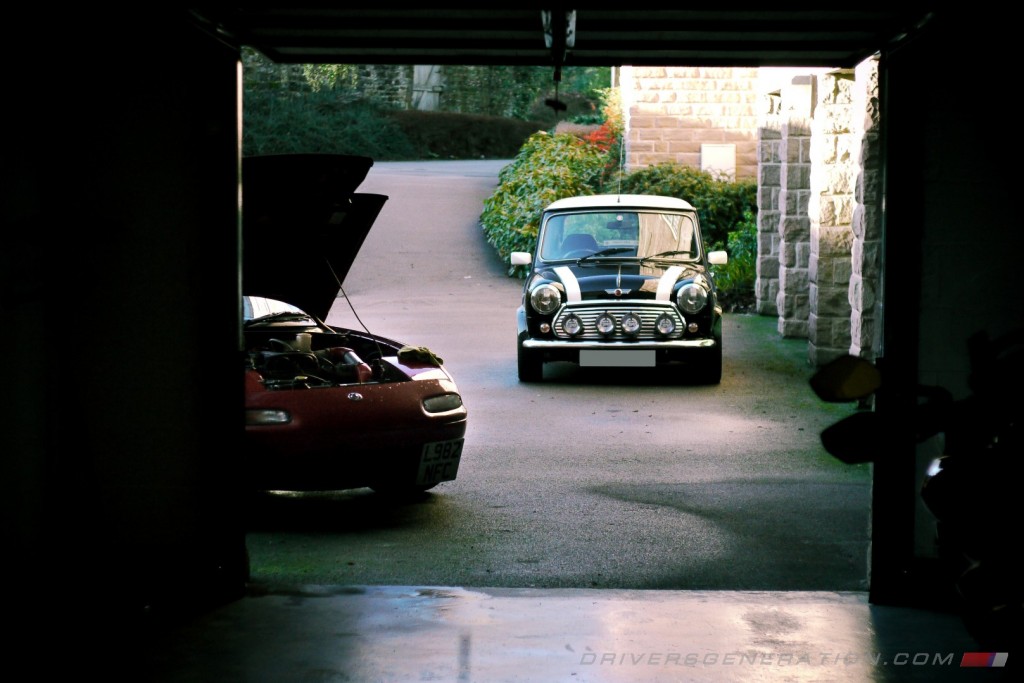 Back in 2001 when Andy originally bought the car with only a couple of thousand miles on the clock, the Classic mini came in three different flavours, the vanilla “Mini Seven”, the 13 inch wheeled “Cooper Sports Classic SE” or the one that Andy opted for, the 12 inch wheeled Mini Cooper Classic SE.

Back then, there were 2 ways you could get yourself an “S-Works” car, one was to buy a full factory built machine and the other was to have the kit installed by John Cooper Garages themselves. Andys car was trailered down to the famous garage in Worthing and they set to work on it. In another jammy turn of events, JCG decided that the car was such a mint example they converted it to an official factory build rather than a kit conversion, numbered plaque, personally signed by the son of big man himself and everything.

Andy ran the car as everyday transport for a few years until it was sold to his dad, another car nut, who had the little Mini running round the alps for fun.

Last year he bought back off his old man and it now resides in the Peak District, happily being hooned about by a very Jammy fella and his missus.

As you’ll see from the images, the car is completely immaculate. Not even the merest hint of rot exists anywhere on or under it. The interior is a cool place to be, brings back many fond memories of blasting around in my own Cooper all those years ago, but my cars were never as perfect as this one. The Schroth harnesses that are still hooked into the rear seat mounting points reveal a not so sedentary life as some classic cars enjoy. This Coopers’ quite rightly been enjoyed to the limit on tracks and Sprint events in the past by members of the family, and the fact that it’s still in such an original state twenty-odd thousand miles later is quite frankly a miracle, especially considering I know what their driving’s like.